To share your memory on the wall of Foster Blackburn, sign in using one of the following options:

Besides both parents, Foster is preceded i... Read More
Foster Blackburn, age 82, of Varney, KY., passed from this life, Friday, August 2, 2019. Foster was born to the late Bill and Maggie “Coleman” Blackburn in Pike County, KY., January 6, 1937.

Foster served his Nation proudly in the United States Navy. Foster was an honored Veteran who wore the title proudly. Foster also was a bookkeeper for thirty- five years at Pilgrims Rest Old Regular Baptist Church. He wore the title “Honorary Clerk” because of his trust and discipline.

The family will accept friends at Thacker Funeral Chapel Sunday, August 4, 2019 at 6:00 PM. The funeral services will be Monday, August 5, 2019 at 1:00 PM at Pilgrims Rest Old Regular Baptist Church with burial following at Annie E. Young Cemetery. Pilgrims Rest Old Regular Baptist will be the officiating all services honoring the life of Foster Blackburn with DAV Honors observed by the Johns Creek Chapter #166.Arrangements are entrusted to the Thacker Memorial Funeral Home of Pikeville, KY.
Read Less

To plant a memorial tree in honor of Foster Blackburn, please visit our Heartfelt Sympathies Store.

There are no events scheduled. You can still show your support by sending flowers directly to the family, or planting a memorial tree in memory of Foster Blackburn.
Plant a Tree

We encourage you to share your most beloved memories of Foster here, so that the family and other loved ones can always see it. You can upload cherished photographs, or share your favorite stories, and can even comment on those shared by others.

Posted Oct 04, 2019 at 10:39am
To Rhonda, Sheila, Mark, Neil, had no idea that Dad had passed away, so sorry for your loss. He was always so nice to me, and nettie was to. Growing up with them around all of us kids, had parent at every household on Brushy Creek. May God Bless all of you.
Comment Share
Share via:
J

Flowers were purchased for the family of Foster Blackburn. 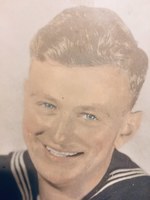